So what is it about? Let’s first look at how the compiler works without whole-module optimizations.

Modules and how to compile them

A module is a set of Swift files. Each module compiles down to a single unit of distribution—either a framework or an executable. In single-file compilation (without -wmo) the Swift compiler is invoked for each file in the module separately. Actually, this is what happens behind the scenes. As a user you don’t have to do this manually. It is automatically done by the compiler driver or the Xcode build system. 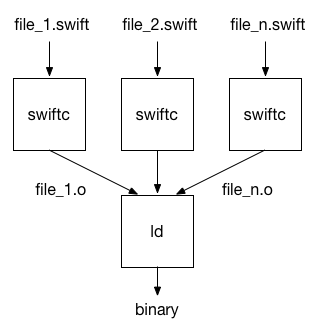 After reading and parsing a source file (and doing some other stuff, like type checking), the compiler optimizes the Swift code, generates machine code and writes an object file. Finally the linker combines all object files and generates the shared library or executable.

In single-file compilation the scope of the compiler’s optimizations is just a single file. This limits cross-function optimizations, like function inlining or generic specialization, to functions which are called and defined in the same file.

Let’s look at an example. Let’s assume one file of our module, named utils.swift, contains a generic utility data structure Container<T> with a method getElement and this method is called throughout the module, for example in main.swift.

Even the simple return statement in getElement needs a lookup in the type’s metadata to figure out how to copy the element. It could be a simple Int, but it could also be a larger type, even involving some reference counting operations. The compiler just doesn’t know.

With whole-module optimization the compiler can do a lot better. When compiling with the -wmo option, the compiler optimizes all files of a module as a whole. 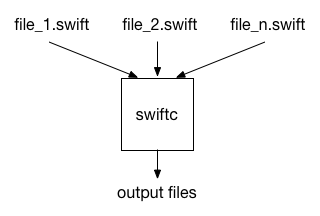 In our example, the compiler produces a version of the generic Container which is specialized for the concrete type Int.

Then the compiler can inline the specialized getElement function into the add function.

This compiles down to just a few machine instructions. That’s a big difference compared to the single-file code where we had two calls to the generic getElement function.

One very basic optimization is the elimination of so called “dead” functions and methods. These are functions and methods which are never called or otherwise used. With whole-module optimizations the compiler knows if a non-public function or method is not used at all, and if that’s the case it can eliminate it. So why would a programmer write a function, which is not used at all? Well, this is not the most important use case for dead function elimination. Often functions become dead as a side-effect of other optimizations.

With single-file compilation the compiler driver starts the compilation for each file in a separate process, which can be done in parallel. Also, files which were not modified since the last compilation don’t need to be recompiled (assuming all dependencies are also unmodified). That’s called incremental compilation. All this saves a lot of compile time, especially if you only make a small change. How does this work in whole-module compilation? Let’s look at how the compiler works in whole-module optimization mode in more detail. 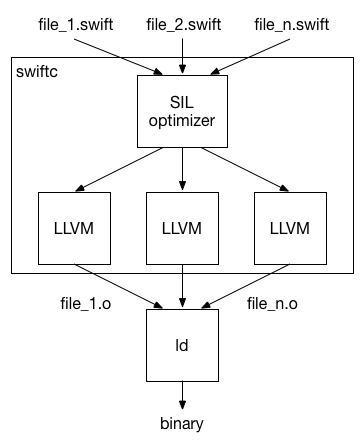 Parsing and type checking is very fast in most cases, and we expect it to get even faster in subsequent Swift releases. The SIL optimizer (SIL stands for “Swift Intermediate Language”) performs all the important Swift-specific optimizations, like generic specialization, function inlining, etc. This phase of the compiler typically takes about one third of the compilation time. Most of the compilation time is consumed by the LLVM backend which runs lower-level optimizations and does the code generation.

After performing whole-module optimizations in the SIL optimizer the module is split again into multiple parts. The LLVM backend processes the split parts in multiple threads. It also avoids re-processing of a part if that part didn’t change since the previous build. So even with whole-module optimizations, the compiler is able to perform a big part of the compilation work in parallel (multi-threaded) and incrementally.

Whole-module optimization is a great way to get maximum performance without having to worry about how to distribute Swift code across files in a module. If optimizations, like described above, kick in at a critical code section, performance can be up to five times better than with single-file compilation. And you get this high performance with much better compile times than typical to monolithic whole-program optimization approaches.